Wyatt: Death of the Family? 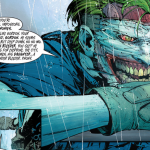 Last night on RAW during the Firefly Funhouse segment we got to see Bray’s new attire and what his secret was about. Bray reveals that even though his heart is warm his head is still filled with darkness, but he has been able to control the darkness. This is the darkest character of bray we have seen as it is revealed. But have any of you realized that his mask and demeanor as the Joker character in Batman Death in the Family. This is also fitting as we see that the Wyatt Family is no longer a family as Bray is alone. What do you all think?!