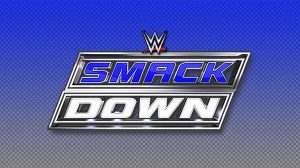 Shane starts the show off and calls out roman for assaulting his father. This was a very good Shane promo per usual, arrogant and cocky Elias distracts roman and Shane attacks, however double team proceeds. Elias and Shane hold down roman, ending in a drift away by Elias.  Kofi has first singles match vs Shinsuke, The New Day address that BIG E is injured, and Kofi and Xavier accept that Big O is their honorary member.

Balor makes his way to the ring after the promo. Finns and Andrade’s feuds continues Smackdown, Andrade claims he wants to claim his legacy upon broken heroes. This is one feud that is truly thrilling we have two of WWE’s top talents and most athletic. Andrade comes out the gate very strong with a high risk spinning dive on the floor. Andrade dominated during the commercial break, as a side note it I personally love the split screen during commercials, this feature is great so that action is not missed.

As we come back Balor starts to gain momentum and reverses a top rope hurricanrana which leads to a senton plancha. Zelina Vega goes to the top rope to attack Finn, who is pushed out of the way by Andrade who catches Zelina and lets her down softly, Finn takes advantage and shotgun dropkicks Andrade which leads to Finn to hit the Coup De Grace for the win. Backstage Elias is playing calling out Roman Reigns at Money in the Bank.

Shane joins Elias who states that Roman will never accept and a new friendship is forming between Elias and Shane. Kairi Sane makes her way to the ring vs. Peyton Royce. Kairi is accompanied by Paige and Asuka. Mandy and Sonya confront Paige about her “experiment” Mandy wearing a rather revealing attire that no one would think is sore on the eyes. The Iconics come out and cut a great promo, making every excuses as to why Peyton lost to Kairi. A rathe entertaining promo, on the mic The Iconics cannot do wrong even as cheesy as it might be. Kairi makes quick work on Peyton Royce. Kairi even small is one of the most talented women on the roster. Mandy comes out with Sonya clapping the win that Kairi just had. As Asuka, Kairi, and Paige stare down Mandy and Sonya Jinder Mahal comes down the ramp another late edition from the superstar shake-up. It is announced that he will have a match against Chad Gable next. Aliester Black has a dark vignette, is this a change to his gimmick? He focused on the word at the ending “condemned” is he no-longer fading to black? One of the best and truly different character however if done right this could be the connection that Black may have been lacking to the main roster fans.

Chad Gable is attacked by Lars Sullivan. Lars gets no reaction from the crowd as he destroys the Singh Brothers only to be saved by R-Truth. Lars makes his way through Truth. This is a wrestler who I see to be the next “Roman” push where he is going to be fed down fans throats as a Heel but in reality, very little care to even see him. The only thing that is a positive is that maybe we will see Truth more regularly. Roman is backstage and accepts Elias’ challenge at Money in the Bank. We are graced with the queen Charlotte, for the first time since WrestleMania she will face “The Man” Becky Lynch. Charlotte enters the ring and cuts a strong promo on the match at WrestleMania stating she was never pinned and that Rhonda Rousey lost Charlotte’s championship, that The Queen never lost. Becky comes out and states that she has already beat Flair. Becky says she needed to know she could beat Rousey because she has already beaten Becky time and time again. Becky is the Champ Champ but also the Champ on the mic. Becky can do no wrong in this direction. Charlotte announces she is next in line after Lacey Evans, Becky says no, she wants new challengers and that she needs to make way because there are many other women who needs to move up. Bayley comes out and states that Becky has never beat her and calls out Charlotte that title shots are earned not owed. Bayley cuts off Flair and wants a match tonight. Charlotte gets the win over Bayley and Becky announces she will face Lacey Evans in a match for the Raw title and then later face Charlotte for the smackdown title later that night.

The main event of the night is Shinsuke vs. Kofi. Rusev and Lana join Shinsuke at ringside while Big O (Kevin Owens) and Xavier Woods join commentary. This could be a match to get Shinsuke back to the main event status. Really his run on the main roster has been lack-luster as creative hasn’t really figured out what to do with him or how to package him. Shinsuke is being booked strong in this match. However, it is a little awkward to have Owens and Woods on commentary but only for short bursts. I’d rather listen to them and the commentary team comment on the match and really show the prestige of Kofi being champion. The match ends with Rusev attacking Kofi after Kofi hits an S.O.S. Xavier Woods is hit with a knee and Shinsuke goes after Owens and Kofi in the ring. Kofi pushes Owens out of the way and nails a trouble in paradise only for Owens to turn on Kofi hitting Kofi with a super kick. Owens turning on The New Day and grabbing the championship holding it above Kofi but Kofi has one last punch on Owens before Owens decimates Kofi in the ring. The Kevin Owens show is back on Smackdown! Owens hits a powerbomb to woods on the edge of the ring, the hardest part of the ring as you may know as the show ends.